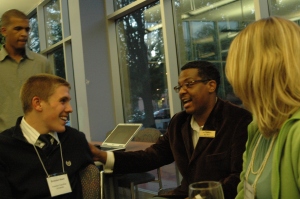 As the holidays begin, the political primary season waits just around the corner. Once again, commentators question whether younger participants might make a difference in the next general election. Many contend younger participants must get involved in the process for democracy to truly work, but younger voters historically refuse to vote in large numbers.

Yet over two days in the fall semester, more than 50 college and university students started their involvement by participating in the third annual conference of the American Democracy Project’s Southern Consortium at Kennesaw State University in Kennesaw, Ga. Conference coordinator Michael Ross, KSU’s associate professor of middle grades education, confirmed that 81 people – 51 students and 30 faculty or staff members – registered for the conference.

ADP seeks to produce graduates who understand and are committed to their roles as citizens in a democratic republic. Currently, 228 institutions in the American Association of State Colleges and Universities participate in the project.

“How can we drive the commitment to civic engagement to the core of the academy?” KSU’s Provost Lendley Black asked a room full of college and university students, professors and administrators prior to Associate Dean Michael Heard introducing the Alabama circuit judge who ruled against the Ten Commandments’ Judge in the late 1990s. “Too many students see citizenship as an on-again, off-again activity.”

“Alabama Circuit Court Judge Charles Price provided insights into continuous citizenship during a plenary address to the ADP-South conference. Price’s ruling that the courtroom display of the Ten Commandments was unconstitutional brought death threats but earned him both the Wiley Benton award, honoring the lawyer of the Little Rock Nine, and the John F. Kennedy Profile of Courage, which chose Price as Alabama’s first black recipient.

“I respect people of faith for I am one of them,” Price said. “As a judge however, I will do what is legal and what is right.” END_OF_DOCUMENT_TOKEN_TO_BE_REPLACED