Two nights ago, I saw a news report on a gentleman using vegetable oil to run his diesel truck. He said the exhaust smells like french fries, but said he only paid 6 or 7 cents a gallon to get the fuel from a local restaurant.

Earlier this month, I, too, grew weary of high gasoline prices. I’d only had my Chevrolet Impala a year and a half, but the $40-$50 fill-up price took a huge chunk out of my pocket since I commute to Monticello in southeast Arkansas at least twice a week. Rather than giving the munchies to the drivers behind me, I decided on an alternative course of action. 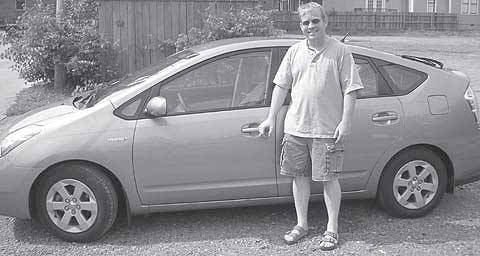 I traded the Impala for a Toyota Prius, one of these new-fangled hybrid cars. I’d originally wanted a hybrid when I bought the Impala, but my brother Chuck, who runs El Dorado’s Teague dealership, said I’d have to put my name on a year-long-waiting list since the hybrids stayed on the lot less than a week at best. But when I called him in mid-April, he just happened to have one on the lot.

After discussing it for a few days, my wife and I agreed it would be a good purchase. So I drove from Monticello to pick up the hybrid, sight unseen.

When I arrived, Eric Grimes taught me how to drive Prius … that’s right, “taught.” I’ve driven for the better part of 25 years, but this vehicle ain’t your regular car.

For starters, you don’t have to pull the keys out of your pocket to unlock or even start the car. When you do start it (with a button that looks like you’re starting a computer), a touch-screen displays average and current miles per gallon as well as showing how the energy’s distributed. If that’s not enough, the touch-screen doubles as controls for climate and stereo, and acts as a screen for the back-up camera that automatically kicks in when putting the car in reverse.

While more features exist, let’s just say all the bells and whistles make this car “high-tech;” but that’s not why I bought it. Nope, the only reason I wanted it screamed from the window sticker – “50 mpg highway, 61 mpg city.”

That night I learned the difference between the Impala’s gas mileage and the Prius. I left El Dorado with a full tank of gas and drove to Monticello to pick up grading and books from school Then I took the trek to Little Rock.

I started worrying when I’d passed the Sheridan exit on 530 North – the gas tank still said FULL! As I pulled out my cell phone to call Chuck and ask if I had a defective car, the digital bar dropped a notch … at 146 miles. (I think the 10-bar digital display may not correspond exactly with the 12-gallon tank, but maybe you just cannot see the first and last gallons … ah, you sneaky Mr. Toyota).

By the next day, people stopped me in parking lots to ask how I liked the car. One guy even followed me to the bank!

After getting over the initial excitement of owning my first “off-the-lot” new car, I grew intrigued over whether the listed gas mileage was fact or hype. I know certain things decrease gas mileage (hills, air conditioner, speeding, etc.), so I decided to test the 50 mpg figure. I found by driving 55 mph on the highway, I averaged 50.6 mpg.

While not advocating speeding, let’s say an emergency compels you to exceed the speed limit. At 74 on the highway, the hybrid gets 27 mpg pulling a hill, increasing to 38.9-44.7 mpg in straight-aways and as high as 99 mpg if coasting down an incline. The “energy monitor” on the touch-screen display allows you to track it that closely, which can detract the eye from upcoming tractor-trailer rigs – be careful!

Let’s say this emergency grades higher than your average emergency. At 80 mph, the hybrid gets 27 mpg on the low end. Let’s say it’s a super emergency … well, I haven’t had one of those yet.

My wife, Tanya, drives the car when I’m in North Little Rock. Even with the hills of the area, she says she’s averaging 51 mpg or better. I imagine if we lived in a flat area, that 61 mpg might be possible.

While that all sounds cool, I will put it in perspective. When filling up the 16-gallon gas tank of the Impala, I paid $30 when gas neared $2.10 (ah, golden memories!) and as much as $50 when gas reached $2.82; granted, I only put mid-grade in it, which adds at least a dime per gallon per tank. Since I’ve had the Prius, I’ve filled it three times (I drive more than 500 miles per week). I’ve yet to pay more than $25 a tank – anywhere from eight-to-nine gallons since I haven’t run it completely out – with gas in the $2.80 range.

Some friends have questioned me about the maintenance costs, and with good reason. I’m hard on transportation and I’ve been known to run everything from bicycles to automobiles until they die. But I’ve also owned a few Toyotas. One pickup I had got more than 250,000 miles before giving up the ghost. I won a Toyota Cressida for a dollar playing bingo. We took the back seat out of it and loaded it down with camping equipment for a three-month trip to Telluride, Colo. In short, Toyota builds good cars.

Yet I admit, I’m scared of rumors of replacement batteries running in the thousands of dollars. However, the original battery comes with a 100,000 mile or eight-year warranty. They recommend changing the oil every 5,000 miles – instead of 3,000 – and rotating the tires at the same time. As long as this is done, Toyota will help with tire replacement if the tread gets too low before 100,000 miles. The government even plans to give me a tax creditnext year for buying a hybrid.

I don’t mean for this to sound like an advertisement, but I do think people should consider hybrids rather than forking out loads of money on gas. I’m looking forward to buying gas today; the prices in Monticello say $2.64. But maybe more than anything, I’m glad I’m not torturing those poor souls who haven’t eaten but who’d have to smell french fries if I drove a diesel running on used vegetable oil.

This article originally appeared in the May 9 – June8, 2006 issue of the Little Rock Free Press.

Download the page here as an Acrobat PDF file.