Blank Generation will hold its “Beer or Bust” Festival on June 4-5.

“It’s kind of like our last hurrah to stay in business,” co-owner Shoni Estes says. “It’s a benefit festival to help us pay the costs of our liquor license.”

Though their music calendar runs through July on their Web site, Estes says those shows are dependent on whether the business gets the license, noting that even Chuck E. Cheese’s offers beer.

“In Little Rock, if you don’t have a liquor license it’s almost impossible,” she says. “A lot hinges on this. I’m not exactly sure if we’ll still have shows. We may have to use that space for something else.”

“We opened up four years ago and we’re excited that we’ve made it this far, co-owner Chris King says. “We’ve been real fortunate, as we’ve made a lot of good friends down here.”

The party starts Wednesday, June 23 with the Greyhounds opening for the front porch soul of MoFro at 9 p.m. Tickets are $8. B-Side opens for the “hick-hop” of The Hosty Duo at 9 p.m. Friday, June 25. The Tragikly White Band will conclude the weekend with a party rock flavor at 9:30 p.m. Saturday, June 26. Tickets are $6. Although some of the bands have played Sticky’s before and have become friends, King chose the bands for the anniversary because “they’re real popular.”

As part of the foundation of Little Rock’s vital non-mainstream music scene, Little Rock’s oldest traditional/contemporary music organization will feature a wide variety of performers from LRFC¹s early days performing music from across the wide folk spectrum in a good old-fashioned LRFC format of 15 minute and 30 minute slots. Scheduled artists include Robert Bowen, Kelley Franklin, Len Holton, Lark in the Morning, Meet on the Ledge Band, and The Metrognomes of Love.

Admission is $10 at the door. Students can receive a 50 percent discount with a valid student ID, while children 12 and under are free.

Arkansas’s 168th Birthday Party celebration will be held Saturday, June 19, from 5:30 to 8 p.m. on the front lawn of the Old State House Museum, which is the oldest surviving state house west of the Mississippi River and was Arkansas¹s original state capitol building. The celebration features live music, museum tours, a silent auction, face painting, storytelling and hands-on activities for children. 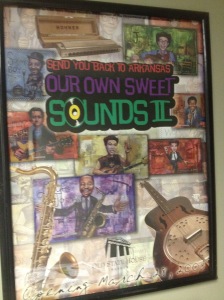 Tickets for Arkansas’s 168th Birthday Party are $6 per person or $25 for a family, and can be purchased at the museum¹s front gate. Food, beverages and birthday cake are included in the price of admission. This year’s proceeds will help support the upcoming blues concert planned in conjunction with the museum’s exhibit, “Send You Back to Arkansas: Our Own Sweet Sounds II.”

“It is the hope of the 1836 Club that the Arkansas Birthday Party will become an annual event to help raise money for the Old State House Museum to support future exhibits and events celebrating Arkansas¹s heritage,” says Jamie Zachrich, OSHM 1836 Club Treasurer.

For further information about this event, please contact the 1836 Club president, George Matteson, at 501.362-1907 or e-mail the organization at oshm1836club@yahoo.com.

The String Cheese Incident and Perry Farrell will perform as “The Perry Farrell Incident” – only at the Lollapalooza show in SCI’s home state of Colorado.  Otherwise, SCI headlines day two of the 16-city traveling festival, which stops in Dallas Aug. 25 at the Smirnoff Music Center. The String Cheese Incident will fill in the “off” days with full-blown shows in various markets along the routing. Of course, you can catch them June 11 at the 2004 Bonnaroo Music Festival in Manchester, Tenn. For more information, visit www.stringcheeseincident.com

Godsmack’s recent release, the acoustic “The Other Side” (Republic/Universal Records), has reached gold status. Fueled by “Running Blind,” the disc features acoustic renditions of Godsmack hits and three brand-new tracks. Produced by vocalist Sully Erna and mixed by David Bottrill, the disc has also been released as a surround sound 5.1- channel high definition Super Audio CD (SACD), one of a select few currently available in this genre of music. Combined with SACD’s superior dynamic range, definition and clarity, this disc perfectly captures the full dynamic impact of a live performance. The dual-layered “Hybrid” allows the disc to be played in stereo with standard CD sound quality by any conventional CD player. For more information, visit www.godsmack.com

“I have a wonderful relationship with all the folks at Sony/Columbia and they have once again shown their true dedication, by allowing me to move on at a crucial point in my career,” Robison said. “I look forward to working with everyone at Dualtone as they continue to show their good taste in the music they choose to release.”

“Charlie represents true country with an edge,” co-president Scott Robinson said. “We’re extremely excited about our new family member and we are looking forward to building on his prior successes.” For more information, visit www.charlierobison.com

Multi-platinum recording artist Uncle Kracker will release his third solo effort, “Seventy Two & Sunny,” June 29 on Lava Records. Tunesmith Diane Warren penned the new single “Rescue,” which follows closely on the heels of the crossover hit “When the Sun Goes Down,” featured on Kenny Chesney’s album. Chesney, returns the favor by collaborating on “Last Night Again,” the album’s closer.  The pair will kick off the “Guitars, Tiki Bars, And A Whole Lotta Love” tour beginning June 3 in Tulsa, Okla., and continuing through mid-September. For more information, visit www.unclekracker.com

Lamb of God recently finished “Ashes Of The Wake,” the follow-up album to the band’s critically acclaimed “As The Palaces Burn.”  The new album, produced by Machine (Clutch, King Crimson, Pitchshifter), and featuring special appearances from Chris Poland (Megadeth) and Alex Skolnick (Testament) will hit stores this fall.

“Our new record has more range than any of the others,” says guitarist Mark Morton. “We’ve really stretched out on this one and pushed ourselves harder than ever before…”

Lamb of God, Hatebreed and Slipknot, will be the only non-rotating bands on the Ozzfest 2004 second stage. Hailed as heroes of new American metal, Lamb of God injects a contemporary extreme music aesthetic to create an unmistakable signature sound that transcends genres and is appreciated by any open-minded music fan. For more information, visit http://www.lamb-of-god.com

Ben Folds continues touring in anticipation of his new album due in early Fall. Teaming up with Rufus Wainwright and Guster for a triple-headliner Summer tour, Folds will showcase songs from his next release as well as from his recent solo EP’s – “speed graphic” and “sunny 16.” Featuring fellow Ben’s – Lee and Kwellar – the EPs were sold on the Internet and made available to fans within just three weeks of being recorded.  You can still find them at www.attackedbyplastic.com.